In the intensive times at work, most of us don’t have time or energy to bother with the little details on the coding standards. But sometimes these things that we avoid chase us. When we finally end up with a spagetti code or deploying issues or environment management issues, then we take action to fix these stuff. These issues can be reduced drastically from the beginning of the projects. I will share some basic and easily applicable tips for project structure and boilerplates.

A boilerplate (a.k.a. skeleton code, base template, scaffolding, starter kits) is simply a code repository to generate or start new projects from it. You define everything you use in a project from the beginning, e.g. ignore files (.gitignore, .dockerignore, …), config files and structures (lint configurations, testing configurations, environment configurations, …), code style, project structure and so on… If you want to start a new project, you just need to fork the boilerplate repo and build on it.

Build your standards once, and then build your projects on top of it.

You can see the complete template code in my Github Account

When to Use a Boilerplate#

Boilerplates has cool benefits, yet in some cases you better start from scratch. You may need to produce boilerplates if you are going to…

other situations than the above, you might not really need a boilerplate. Contrary, boilerplates might limit your elasticity in development in different aspects.

We are going to create a boilerplate for FastAPI (Python3 web framework), which features;

from the beginning. So you don’t have to deal with these stuff unless you need something custom. Just focus on development!

Our project structure will be:

Explanation of the Project Structure#

Just the production and local environments are involved to reduce the complexity of the example.

One thing to use from the birth of a project, it’s the config. Most of the projects I’ve seen so far, uses the application settings in application state, which is being carried to every corner in the app in an event loop (for asynchronously working microservices), for example. If not, it’s being read from a config file every time it’s been called.

It should be easy for a developer to spin-up a project with different environments and settings. It can be time consuming to adjust settings to switch development environment.

Checkout my other blog post (external link to my blog) for more details on multi-stage builds.

With this setup, we can switch between environments, builds with one simple command:

Test cases are separated into the ./tests/ directory to keep the ./src/ directory plain. You won’t use the tests at runtime anyway, so no need to keep them under ./src/.

Running tests on a src layout can be tricky because of the import rules of Python. Both tests and the project has to be started from the root directory. Otherwise, you might encounter import errors while trying to run the tests or the program itself. 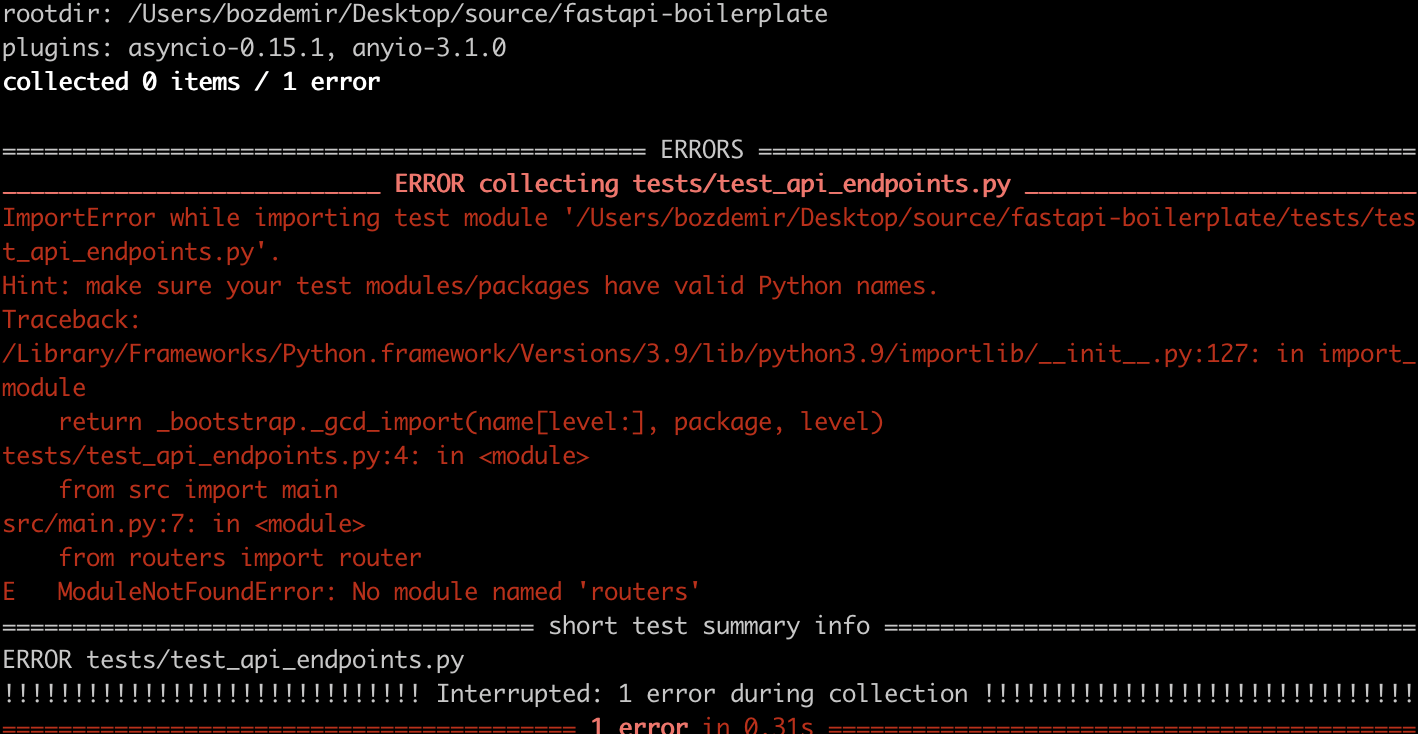 But we already have a main script to run at the root: ./run.py . So we can run the program in root directory and test it in the same place without facing any import errors.

We can also run our automated tests in docker multi-stage builds or at CI/CD pipeline. You may also add listing using pylint and security checks using bandit.

I believe that a developer should get right into coding, without any efforts on adjusting the environments or changing/creating coding standards. As you can see in the example code I’ve written, my needs in a project is;

So I’ve decided how should this needs ought to met. I’ve set some standards from the scratch and that should save me lots of time during the life of the project.