Building a Docker image with ordinary quality is quite simple. Pull an image, copy your app into the container, install the dependencies and run your program.

If you’re thinking beyond just successfully ‘running’ the program, you’re at the right place. We are going to dive into the details of our image contents, reduce build time, run tests before creating the image, add functionality to Dockerfile, and ultimately create better Docker images.

Multi-stage builds… You might not have noticed it but you already have been using this method. The base images you’ve been pulling define the anterior stage of your docker images. They’re being built just like you are building an image. So, technically, your base images are the first stage of your builds.

We’ll be doing the same thing here, but in a more detailed way than just using production-ready base images.

We’ll work on a simple FastAPI (a Python3 Web Framework) example, and our folder hierarchy will be;

You can see the contents of the files at this repository.

With the Dockerfile.plain build, we have: 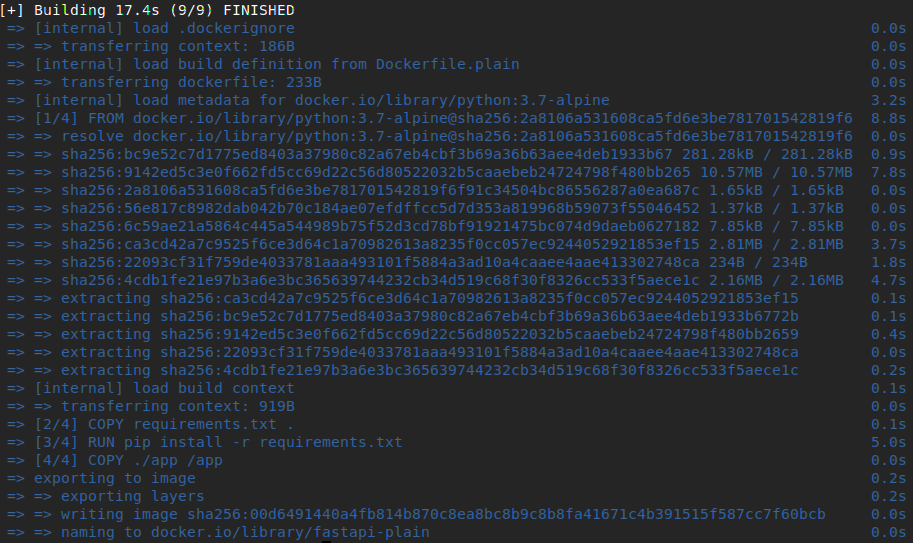 I believe you can see that this Dockerfile does just what I’ve described in my beginning sentences. Pull the image, copy your app into it and run. This approach can be quite enough for almost every situation. It’s plain, easy and working. But, to be honest, I think

Quick note; be aware that the examples in this post are just a simple subset of real-world scenarios. So, the benefits of using multi-stage builds in Docker may vary based on the type of programming language (interpreted or compiled) used in our project, size, and complexity of the project, expectations from the project (security, performance, fault-tolerance), and so on…

We need a base image with the necessary dependencies downloaded to use later in the deploy stage. We’re going to download wheels for our required python packages.

Wheels are the new standard of Python distribution, that is to say, they are files to install Python packages -better than the old eggs.

To install wheel packages, we need some low-level libraries installed on top of our base image, alpine. Thus, in the first stage we’re going to install:

Now, required packages have been downloaded as wheels and stored in /wheels directory. We can use this build stage as a base image later in similar projects with the same needs. It is lightweight and flexible to be used in similar asynchronous Python web framework projects.

For the testing stage, we’re going to install a new set of requirements. As it can be seen in the requirements-test.txt file:

We’ve copied our requirement files in the root directory (line 3) and install the required packages for tests (line 4). This step was separated on purpose to be cached.

We may also target other developing environments like; local, develop, local-test, you name it. This way, you would deploy your container in any environment as you want, like:

Finally, we can run our program. This stage can be written as:

We’ve chosen the python:3.7-alpine image because installing python on top of the alpine image might result in a larger image.

Note that, in line 3 we’re copying files from the build stage, that’s one of the reasons why multi-stage builds are cool.

Then we install these wheels into our deploy image with no caching (--no-cache-dir flag) (line 6) and then delete everything about requirements (line 7).

We are ready to launch now. 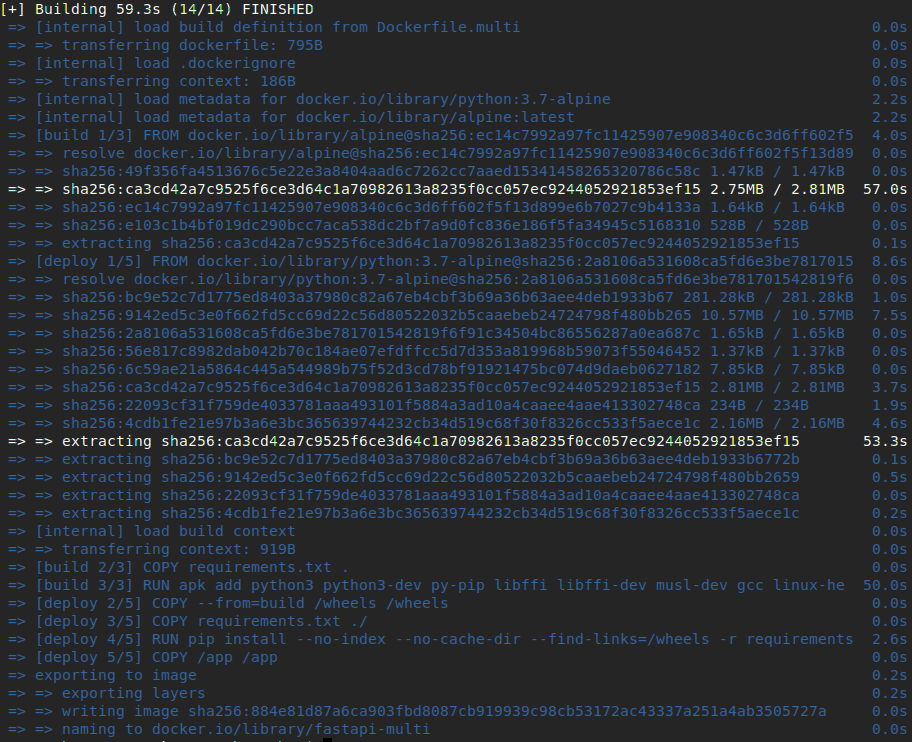 You can see that there are lots of advantages of using multi-stage builds. If you’ve your applications running on top of public images, you may benefit in security, performance, and quality by moving from production-ready images to your custom images.

You’ll have maintainable, flexible, and lightweight images at last.